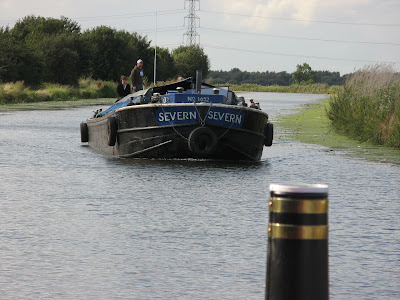 I realised in the middle of the night that with the Shroppie impassable at Shebdon, there really was no way of getting to Stretton without retracing our steps up the Trent. That plan pushed the available time to its limit; anything else just wouldn't work. So having resolved to come back via the Trent and T&M, we thought Sheffield might be back on the cards, if we could get there and back (from Doncaster) within five days. Another call was made to Tinsley. Yes, we could still go up on Saturday, but we wouldn't be able to come back until Wednesday. By now I was starting to crave simplicity anyway, and resigned to giving it a miss, but so many people have said that the Tinsley lockies are just downright awkward that I am determined to get there one day! It was also suggested that once there they make you stay to keep you in the basin paying £5 a night. I could not comment of course, not having been there myself. It's a shame; I would have loved to have seen the basin, but I shall get there eventually.

Having finally ruled Sheffield out, we spent a happy morning shopping in Doncaster on market day. This is the brilliant thing about northern towns; markets and above all, market halls. It makes me think just how impoverished we are in some ways down south - or at least in Newhaven, where you can hardly buy anything now. I wonder if there will be any shops left by the time we get back. I bought some plastic coated table cloth material and yards and yards of cotton tape (I said I wanted 100 yards and the woman just gave me everything she had. For £2.50!) as I have promised to make bunting for Tarporley to wear at the Angel Festival, which is very shortly after I am due to get back. It was all going rather well until the Tesco value stapler broke. Yes, I would have got the heavy duty one, but there weren't any staples; the cheap one came with staples, but as they were crap it didn't really make any difference.

We had a lovely surprise today coming out of Thorne lock - we saw the Leeds and Liverpool short boat Severn. Then a few lift bridges later, Jim left out BW key behind after helping me with a particularly recalcitrant road gate, and by the time he'd been back for it, Severn had caught us up, with Rick and Barny on board. We spent the afternoon swapping places in a convoy of two, taking it in turn to do the bridges, and are now both here at Keadby, where we should start being locked through at about six thirty tomorrow morning. We have had a lovely look over Severn, and seen practical ways of living just under cloths and making the most of basic facilities. That really does appeal to me, as long as I can keep warm enough.
Posted by S at 8:50 PM