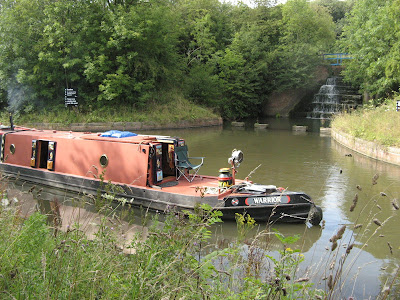 Today we tackled the final 27 locks, from number 47 to number 20, which brought us to the summit level and the limit of navigation of the Chesterfield Canal, blocked by the collapsed Norwood Tunnel, about half a mile from here, but with a navigable section on the far side accessible to trailable boats.

It's a funny feeling, being on a canal so recently restored - part of the final section was completed in 1998; there is a sign lower down, but some of the works up here look more recent still. The mooring we are on looks brand new. The locks we travelled today are effectively one flight, including two double and two triple staircases. From lock 41a to 20 took us three and a quarter hours, which flew by. The locks are all narrow, new and well maintained. The pounds however are like fishponds: shallow and full of weed. Pondweed at that, among other sorts. Not enough to stop us though; the harbinger of doom who said we wouldn't make it was wrong. A few pounds were down, with ominously dry bywashes, but most were at their normal - albeit shallow - level. But we know Bath has been up here, so were ever hopeful (despite one lock very helpfully being labelled as not passable by boats of over 6'10 1/2" beam). It is very green, and very pretty, marred only by the recent building of some obscenely ugly houses. If you brave Worksop Town lock - quite possibly the nastiest I have yet encountered - it is pure loveliness all the way.

After the final lock there is a mile or so of summit before the final winding hole, just before (or after, depending on perspective) which is a very spiffing 24 hour mooring, and this section does feel like going into the unknown, or the past, or something. Shaded cutting (at last! No more weed) with high walls sprouting ferns, through three more bridges ending with the extraordinary Dog Kennel Bridge, and then the final winding hole, with a sort of waterfall pouring into it. We tried reversing on after winding, but it became too shallow almost immediately. I walked up later and it really did look abandoned; full of weed and sporting some very large fish. The bricked up tunnel portal is just visible through the willow herb and other plant life. Then I walked the other way, into Kiveton Park, which had the feeling of a ghost town, although admittedly I didn't go into the town itself, but walked along between the railway and the canal, past and over the foundations and concrete floors of demolished buildings. The mine - I can hardly believe that we are in coal mining territory, but we have been for some time - only closed in 1990. The recentness of it somehow makes it seem all the more sad.
Posted by S at 7:52 PM