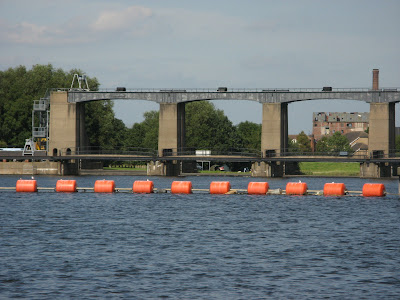 OK, you are going to get a pretty random photo tonight. The process of posting photos with the netbook (aka the Baby Computer) is complex. I don't like to download the pics onto the netbook because it files them in a system I don't understand; I'd sooner wait til we get home and sort them out on the big computer. So I have been taking the card out of the camera and sticking it in the side of the netbook. This works fine for looking at the photos, but the photo-looking programme (PhotoMaster) doesn't show their index numbers except when you're looking at the tiny thumbnails; I cannot find a way to make it display when looking at the big picture. So to select the picture I find it easiest to go through them on the camera and note the number I want to use. I did that tonight, took the card out, and have now forgotten what it was,. So let's see what we get.

Whether or not I like a particular waterway seems to be influenced, to an extent I wasn't previously aware of, by the weather. I don't as a rule like rivers much, and wasn't really looking forward to the Trent, but so far in today's sunshine, it has been most enjoyable. It helps that it has been a day of variety, starting this morning back on the Erewash, where I steered so that Jim could obtain the full work-out benefit of operating the locks. Whatever the fine white dust is that had settled all over the water, giving it a strange reflective haze, and all over the boat, had also, by the end of the morning, covered me as well.

We emerged from Trent Lock back onto the river, and this time turned left to head downstream to the North. I unexpectedly got a bonus canal, the Nottingham and Beeston - that I had only previously thought of as the Beeston Cut and as part of the Trent. But no, suddenly we were back on a city centre canal, and it was really nice, past an imposing (if somewhat plain) building with British Waterways emblazoned in its brickwork against the sky, closely followed by a Fellows Morton and Clayton warehouse.

Back on the Trent was another stunning derelict warehouse, a brutalist concrete beauty, bearing the legend Nottingham Corporation Warehouse 1930. Then we came to the first big, manned, Trent lock - lovely. The second one we had all to ourselves. All we have to do is throw a few ropes! Tomorrow we press on to Newark where we are meeting up with Dave and Izzy again. They are going to lend us their tide tables (though I have already looked them up on the net), and after that the fun will really start when we hit Cromwell Lock and the tidal part of the river.

Toight against our better judgement, but fancying chips, we went and ate at the Unicorn Hotel, a Martsons chain pub. It was grim. I had steak 'n' ale pie (are they really all lovingly made, as claimed, with each brewery's own ale? I can't help but doubt it somehow). The pastry was tough, the meat stringy, and the reconstituted chips were, somehow, mysteriously, cold. On top of that we ate the entire meal (or rather, I left must of mine) with the previous customer's dirty plates on the table. If they had come and asked, as they usually do, if 'everything is all right', I would have told them this. However, they clearly didn't dare. I know Craig will say we should have gone to Tom Brown's, Egon Ronay noted gastropub. And do you know what? We probably should. Either that or stayed in with last night's lentil curry.

The random photo is the approach to Holme Lock, the first biggie
Posted by S at 8:28 PM

I have to add: I just used Microsoft's 'bing' search engine to find out about Tom Brown's restaurant (straight off the page of the blog, using an 'accelerator').
I thought I was going to have to refine the search with '+ restaurant' or '+ nottingham' or similar, but no, bing took me directly to the restaurant as first result.
Spookily brilliant.

And yes, you definitely should have eaten there. Look at this menu for £14.00 http://www.tombrowns.co.uk/earlybirds.htm

Mind you: this is going to be no fun if I end up exploring the eating places of Britain's canals exclusively digitally

What is the photograph of?

It looks excellent. Brutal, soviet, and I like the decaying mill in the background

It says at the bottom. And we would have been seriously tempted by the early bird menu but we weren't early enough. Thea la carte was a bit eye-watering (but mouth watering too, admittedly)