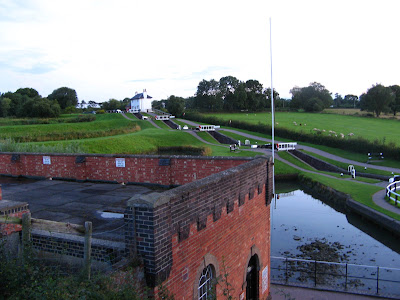 After yesterday's exertions we had a lie in this morning, and didn't set off until eleven. The day started damp and miserable again, and we weren't fully able to appreciate the delights of the very green, rather overgrown Leicester Section. Midway through the afternoon, however, the sun finally came out, while we were waiting in the queue for Foxton Locks. What lovely locks they are. I steered - not that much steering was required - and it was a lovely experience. We were last through again, just as we were at Watford, and had to go along to the next bridge to find somewhere to tie up.

Later we made our way back to have a look at the inclined plane - a shame we'll have to give the museum a miss, but it doesn't open until ten. We bypassed the big Foxton Locks pub, and were heading back to the boat when, passing Bridge 61 (another pub) I was struck by how welcoming it was - there was a sign inviting people to bring their own food to barbecue, as long as they bought drinks from the pub - what a contrast to the negative attitude we saw last night and surely better business - so we decided to pop in. It was a lovely, old fashioned place smelling of woodsmoke, the service was nice and friendly and we were able to buy bread and milk there too. We even got chatting to some local people.

I am rueing somewhat the bargain cocoa butter lotion I bought in Tescos and have applied to my person for the first time tonight. I now seem to smell of a combination of cheap chocolate and old dog.