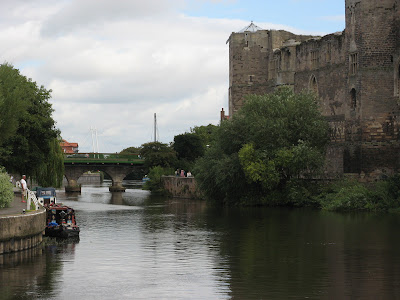 I think we may well have found Britain's nicest town. I almost feel I should keep it to myself before everyone comes rushing to live here. I know I occasionally rave about nice places we've come across, and think yes, it would be good to live here - but Newark beats them all. River, fantastic buildings, including a castle on the river bank opposite which we are currently tied up; no sixties-fication; a great selection of real shops, and hardly any empty ones, including lots of good charity shops, in streets not a precinct. Nice houses and not expensive. Friendly people.... And not full of itself either.

We left Gunthorpe this morning in a heavy drizzle, and only went through three locks, all manned by friendly BW people. Jim gave the engine a really good run (he claimed we didn't have long to get the water heated up), and one woman on a broadbeam which we overtook and met again in the next lock said, 'That little boat of yours doesn't half shift!' Bu the time we came through Newark Town Lock three hours later the sun was coming out and we set off to explore - on what was to become a shopping frenzy. First to a school outfitters and outdoor gear shop, where we each got new waterproofs, and Jim got some new waterproof trousers from the £1 bargain bin, and some new work shoes and boating trousers. Then to the provisions shop for triple smoked bacon. A small local chain called Boyes is like a super eccentric Wilko's, with added haberdashery, and we got some bowls, mugs (sadly my Kent and East Sussex WRG mug got broken yesterday) and woolly socks. Various charity shops yielded a super silk dress, Monsoon blouse and completely mad trousers, all for me of course. Then we found ourselves in the Fox and Crown, accidentally stumbling into a CAMRA super-pub. We didn't have time to see it all and will have to go back in the morning.

This evening we went for supper with Dave and Izzy, and were given four plaques that are very probably Chertsey's; two of them definitely are - the IWA rally at Guildford on the Wey in 1970, and the opening of the Upper Avon in 1974. The other two - Black Country Museum 1981 and HNBOC Christmas gathering at Fradley in 1973 probably are by a process of elimination, but we don't as yet have positive sightings of Chertsey at either of these. I have also seen my first two photos of the boat; one from Waterways World only last year when it formed part of a reader's scrapbook question, and one forwarded to me by Izzy of it on the Wey in the year of that rally. Piecing together these little bits of history is going to be a fascinating and never ending process.
Posted by S at 9:33 PM