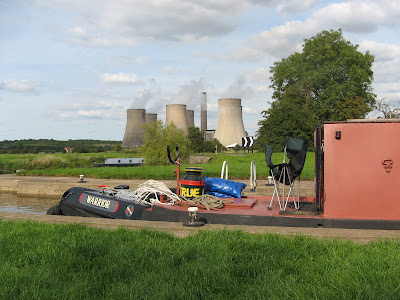 Day 7, Barrow upon Soar to Sandiacre

We stopped at Barrow with the Soar on red, and a red light showing at Barrow deep lock. Naively we had assumed that this was an unbreachable injunction against proceeding further, but were told this morning that it has the same advisory status as the less technologically advanced level marker boards. So we bravely set off, only to pause again at Bishops Mill Lock, simply because lots of other people had. Someone gave us the number of the BW 'flood officer', and Jim rang him, and reported back that we could go, and indeed, so did lots of others. Oh yes, and we stopped in Loughborough for a paper. Then we stopped again at Zouch Lock to take stock, and remove some rather impressive polyester webbing from the prop, before deciding again to proceed (with caution, of course) along with out new companions, intrepid hire boaters. As we sailed towards Zouch, however, we encountered a Waterways chap. At first I thought he must be an impostor, as he wasn't wearing a lifejacket, but apparently not. 'The river's still in flood', he said, somewhat gnomically, I thought. Mmm, I said, are we OK for Zouch? (thinking that the lock might be closed to passage). 'The river's still in flood', he repeated. We rang the flood officer, I said. 'That's me' he replied. Well, I don't know exactly what he said to Jim, but it definitely wasn't 'DON'T'. And yet here he was, semi ticking us off, yet still not prepared to say that we shouldn't. It's all very well taking responsibility for oneself, and I am naturally all in favour of it, but it does depend upon having reliable information and advice from those in the know. I wish they would either come right out and forbid navigation, if it's dangerous, or else not tell people off for trying.

Anyway, we completed our passage of the Soar without any distressing incidents, crashes, sinkings etc, and emerged onto the vast Trent (which isn't in flood) and straight across onto the Erewash Canal. Well, this is my kind of canal. There are disused buildings whose beauty makes me cry. We are tied up tonight in Sandiacre, which is not terribly salubrious, but in front of the most stunningly beautiful vast Victorian lace mill, very nicely converted into flats. A similar building I photographed earlier, frozen at a moment in the process of dereliction (who knows, maybe one day restoration, but less likely now.). Another one in the process of being demolished. If I come back this way again, it won't be here.

A word about the locks, so far. You need a handcuff key for them (haven't used that since the Huddersfield), but frankly I don't know why they bother, because even once you've unlocked them, the ground paddles are utterly, utterly immovable.
Posted by S at 8:28 PM