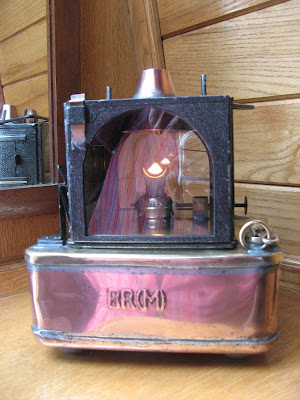 We finally tore ourselves away from Newark at three o'clock this afternoon - although not without a bundle of estate agents' details. Who knows; we could be back. We started this morning with a walk around the castle gardens while hardly anyone else was about. Very impressed by the lack of graffiti generally - although we did spot some name carved into the stone with dates in the 1940s, and one, beautifully cut, from the nineteenth century. Most importantly, unlike many castles, it didn't smell of wee. There was also a refreshing absence of safety fencing, both on the castle and along the riverfront.

Then we hit the shops again, and took a long walk around the town, going right out to check out Newark Northgate station which is on the East Coast mainline - I used to come through on the way to Huddersfield. Then back to the market square where today it was antiques and second hand tots. One stall stood out, selling what I believe the man called 'railway-ana' (wince). Lots of lovely tempting cast iron signs, and a wonderful selection of lamps, which the man told us all about. Of course I ended up buying one - our first real souvenir of this trip. It's a copper and brass signal lamp, from the 1950s, from British Rail Midland region, he told me. I liked the date (I'm thinking Chertsey here of course, not that I've ever heard of anyone having a signal lamp on a boat, but if you got hold of one, well, you'd use it, wouldn't you?), and I liked that fact that it was highly polishable, and that it didn't have any holes in the bottom. Apparently it would run for a fortnight on a tankful of oil - and its big square bottom makes it reassuringly stable.

So then it was off to Wilko's to get some lamp oil. We had two bottles on the boat from when we experimented with the other oil lamps (terrifying), but naturally I had insisted on taking them home. Wilko's didn't have any, but I thought Boyes would be bound to. Couldn't find it on the shelf, so I asked the checkout lady, Do you sell lamp oil? She considered for a very long time before asking, For what sort of lamp? I had to think long and hard about how to reply to this, but in the end couldn't better 'An oil lamp.' 'No,' was the answer. So we got back to the boat and I polished it and we put some diesel in it, and it has been burning away nicely for hours now; only a little flame, because it smokes if I turn it up any higher, but I am looking forward to seeing what it looks like in the dark. Ah, simple pleasures.

Can't stay up very late though as we have an early start in the morning. Having dragged ourselves away from Newark, we haven't come very far. Through just the one lock, Newark Nether, and then into Kings Marina for a top up of diesel and a pumpout - and a bonus surprise sighting of Victoria (but I didn't take a photo this time!), then on to Cromwell Lock, where we await the tide in the morning. If we go through at 06.22, we should arrive at West Stockwith in time for the flood tide, which will make it much easier to get into the lock, and thus onto the Chesterfield Canal - and the next adventure.
Posted by S at 6:28 PM

I really love that lamp!
-carrie

Hi,
Have been following details since you left Cowroast. Newark is a really nice town.

Interestingly, my boat 'Albion Mills' was the first boat up the newly restored, re-opened section of the Chesterfield Canal when it re-opened.

Have a good trip