End of the road for Wigan Pier 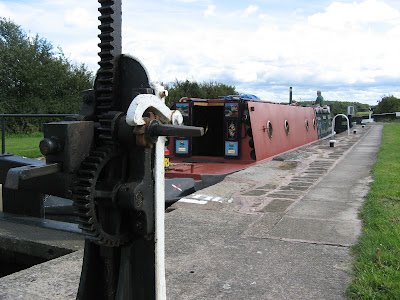 I must admit that I have struggled with The Road to Wigan Pier. Disappointingly, it is far less readable than any I have read of Orwell's other writing - rambling, repetitive and dogmatic - although his descriptions of the sort of bearded, vegetarian, sandal-wearing, fruit juice drinking types that get socialism a bad name are amusing. He appears to have in in particularly strongly for fruit juice. I have not yet abandoned the work; I think there isn't far to get to the end, but it is very dry going. All is not lost however, for my massive tome - a jumble sale Book Club Associates compendium of Orwell's non-fiction and journalism, is as thick as the height of the back slide runner, so by placing it adjacent I can spread the weight and thus make a far more comfortable seat for resting my legs while steering. I do however have to look lively for low bridges and sharp left hand bends, which necessitate leaping down again. On the plus side, I can now operate the throttle with my knee.

On the travelling front also, the road to Wigan Pier has been all but abandoned. Having been seduced by the siren calls of the Chesterfield, there is no way we will have time now to get that far. The Chesterfield is worth it though, and not just for getting the Head of Navigation plaque (I collected a form at the Retford and Worksop Boat Club (visitors are welcome to moor but MUST consult the caretaker or a member of the committee first) this morning while filling up with water. The thing with these new restorations is that they are generally well provisioned with facilities - I haven't seen so many showers since the Huddersfield.

We put in a long day today - would have been twelve hours if we hadn't stopped in Retford (godawful place) for a paper and stayed for tea and buns). The canal is still shallow and weedy, but so far still eminently passable, and there seems to be plenty of water here at least - we have stopped just outside a settlement called Rhodesia - Nicholsons doesn't explain why - although who knows what it will be like when we start going up the serious locks tomorrow. A man we passed this morning mournfully told us that drawing 2'6" we wouldn't make it - but we will plug on and see.

The canal mainly runs through very rural surroundings, mostly farmland. If any industry grew up along its banks there is little sign of it now. Mainly rural. I nearly spoiled the image with a photo of Worksop Town lock, but the ones I took fail to capture its grimness - the graffiti, broken glass, blank walls, rubbish and dead pigeons. Now that's what I call a canal! I am beginning to mistrust Nicholsons, which paints a rather benign image of Worksop, which had enticed us to consider tying up there. One look was enough to tell us that it wasn't really our kind of town. I really don't mind a bit of urban, but dead pigeons are a grittiness too far. So we plodded on, and here we are. The water is not your ordinary canal brown, like tea, but a deep mahogany, the colour of gravy.

Another feature of this canal is a wide variety of paddle gear, and an even wider selection of anti-vandal devices, the worst of which involves undoing a padlock inside a metal box in order to remove the box. I must say other boaters have been extremely assiduous in replacing them. My 'doh!' moment of the day came near the end, when I struggled to unlock the lock only then to realise the the accompanying paddle gear had actually been removed. Today's carefully selected photo shows one of the nicest sorts of paddle gear. It is mostly well maintained, but some of the gates are heavy, even in the narrow locks. Better get some rest now - tomorrow promises 25 locks; 21 of them within a mile and a half, and when we get to the top we have to turn around and come back down again.
Posted by S at 8:26 PM