Brickwork and buddleia, rivets and willowherb 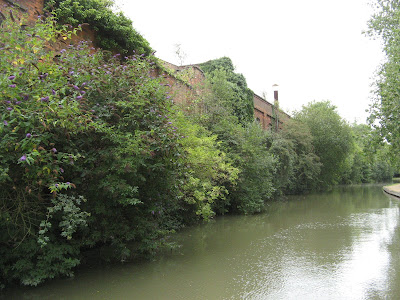 This is the kind of canal scenery I like best. Not nice neat new developments, now pretty countryside (though that's OK) but the inevitably transient scenes of abandonment. This is the former BR carriage works at Wolverton, a vast brick building with a timber and glass roof, decayed, colonised by buddleia, glass broken, timber rotted, but not, at least as far as you can see from the canal, vandalised or graffitied; just taken over by time and nature to create a new thing of beauty.

We did wait for those people at the next lock, in the end, and they were very pleased, but the karma channels were clearly not running very freely, as when we got to the second to top lock here at Stoke Bruerne another boat had appeared from nowhere and was in the lock just as we got to it, and refused to wait. To add insult etc (and give me an excuse for a good swear) they left the top gate open. In the meantime, we had got involved with pulling in and tying up a drifting boat (the second; we had one yesterday at Tring) - which we think the lock hoggers had probably pulled out in passing, and by the time that was done we'd been going for ten hours, the dinner was cooked, so we decided to stay down here, not knowing what the mooring situation would be at the top anyway.