It's Boxing Day, you will recall. Bright and crisp, dry and not too cold; perfect boating weather with oh just a hint of wind. We have negotiated Lodes End Lock and the delightful River Nene Old Course (anything less like the River Nene per se would be difficult to imagine), and we have turned onto the New Dyke, which, we innocently hope, will bring us to the mysterious Shangri-La that is Holme Fen, a winding hole and the lowest pub in Britain. 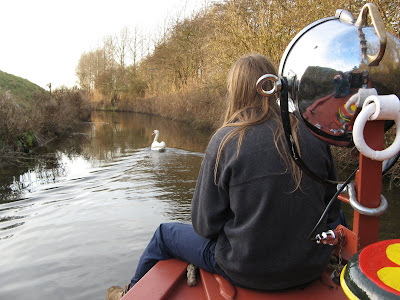 It was a nicely overgrown little channel, plenty wide enough for us, but a bit shallow in places. Tall reeds, trees. Not much weed evident in the water - but, we were later to discover, plenty of it still lying on the bottom. We got as far as a very nice big house on the right bank, to find a tree - or part thereof; I would not like to be guilty of exaggeration - which had been cut down, was in the process of being cut up, and part of which was lying in the water.

Perhaps we should have been braver. Perhaps we should have struggled to the bank and somehow contrived to haul it out of the channel. All I can say is that even if this had been possible, none of us thought of it at the time. We thought we could get round it, or maybe through it. We couldn't. It was too shallow, basically. We got stuck. We pushed off, backed off, and tried again. Got stuck again. And decided to call it a day. Holme Fen will be there another time. So we backed all the way out again, all unknowingly collecting a fine wodge of weed off the bottom as we went. 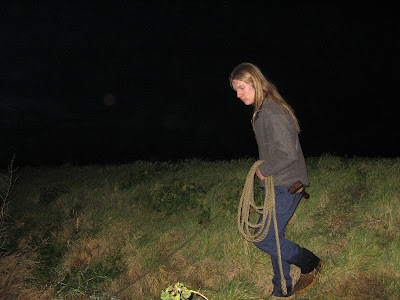 By the time we got back out onto the Nene Old Course it was dark, and the wind was getting up - it was to continue relentlessly for the next four days. On top of this we were starting to sense a lack of power; we wanted to turn round, but couldn't. So we just tied up where the wind was blowing us onto the bank.
...to be continued...
Posted by S at 7:37 PM

Would that be a wet left leg in the above photo? The right does not seem to have the same tide mark ;-)