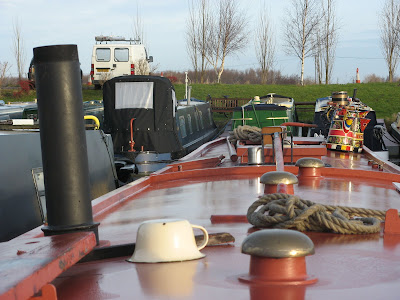 Never let it be said you don't get excitement here at nb Warrior. You will recall that our old saloon chimney mysteriously disappeared at some point last year when we were all looking at the engine, and attempts at buying a replacement at Bill Fen, even more mysteriously, given the standardness of the roof fitting (not to mention the fact that they built the boat), were unsuccessful...

So we got Len Reed the Newhaven welder to make one. I did have a picture of him, at his workshop on the West Quay, just opposite the Fish and Flake Ice Society, but I cannot find it anywhere (still, at least you don't break your nails and get covered in cobwebs looking for electronic photos). He does a lot of work for the local fishing boats. Last time I was there he was making anchors, really simple, traditional picture-book ones.

The chimney's made out of a piece of pipe so it's quite heavy and looks pretty businesslike. It won't be all dollied up, as it's on the 'disappearing' part of the boat; we'll keep it plain. It's even double-skinned, lined with a piece of flue pipe I picked up by the bins at Huddersfield. I knew it would come in handy if I kept it long enough. 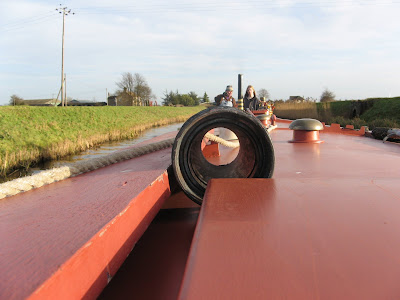 We kept the saloon stove going nearly all the time last week, and most of the time the chimney was off anyway for the bridges; didn't seem to make any difference to the operation of the stove, but still, you've got to have one, haven't you.

And look! So far we still haven't lost the little enamel po that makes such a good cover for when the chimney's off.
Posted by S at 7:38 PM

Im like that, i keep somthing like a piece of pipe and eventually it comes in handy! Happy new year and more importantly happy new chimney!. Lisa