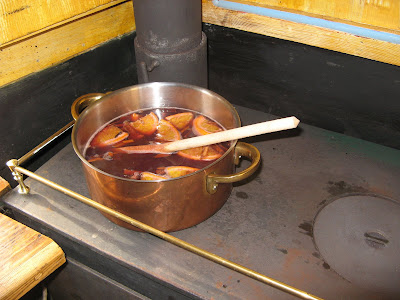 Just the thing to have sitting on the stove when you're off on an expedition. My recipe is based on one given to me many years ago by my friend Donna, but I suspect it has subtly diverged over the years (a bit like RNs and Nationals). All quantities are fairly approximate:

a bottle of red wine - as rough as you like
a pint of orange juice - NOT the very cheapest stuff. Strangely enough, this does make a difference.
half an orange, sliced up
a couple of cinnamon sticks, broken into 1" bits
a teaspoonful of cloves
about four tablespoonfuls of demerara sugar

put into a stainless pan
heat very slowly over a low heat for at least a couple of hours.

Maybe this just happens to be the way I like mulled wine, but on the other hand maybe it is the ultimate recipe. When I have mulled wine that is horrible (thin and sour) it's usually for one (or all) of three reasons
1. Not enough sugar - it really should be quite sticky
2. Not enough cloves (but then my favourite boiled sweets are clove balls)
3. Not long enough brewing (to get the flavour out of the cloves).

Or if you want a more instant festive drink, make up a quantity of this and keep it in the fridge:
Butter, sugar, mixed spice, nutmeg.
Put a chunk in a cup, add hot water, add rum. 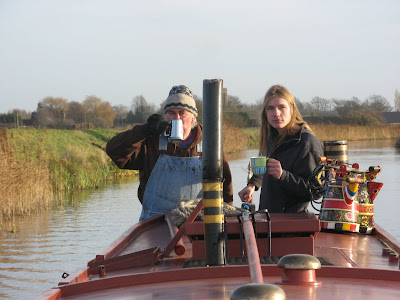 Thus fortified (with wine, not rum), we set off on Boxing Day in search of Holme Fen. Drinking it from pint pewter tankards feels suitably piratical, and there's the added bonus of seeing how far you can spit the cloves - not something you can do at home ... well, not on a social occasion anyway.

Oh! A wine and roses pun just whizzed past me there, but I missed it.
Posted by S at 7:12 PM

I love the sound of mulled wine brewing on the back stove, so I am going to take down the recipe and give it a go.
Thanks for the idea... Jo

Let me know what you think of it!