Look at that wind! 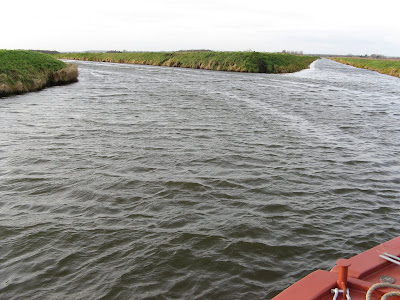 Thursday morning, December 27th, dawned bright. And windy. Having successfully put it out of our minds overnight, we now had to try to see what was wrong with the prop. We were hoping that it was nothing more than weed and/or other debris, but at the back of our thoughts was that nagging fear that we might have done some more serious damage, through the prolongued reversing, especially if that had been combined with having something (like a branch of the offending tree) on the prop.

So down the weedhatch with the weed weapon (I wonded what its proper name is? It’s some sert of agricultural implement, like a scythe but with a long handle and a straight blade). Over time a fair bit of weed came off, but it didn’t look like a boat-stopping amount. So we fired up the engine, and tried to push off from the bank, but the wind was blowing directly side on, and even with three of us there was no way we could get the front and the back off enough at the same time. The engine, ominously, didn’t seem to be helping much. It was about now, I think, that I suggested we wait until the wind dropped a bit. Then I checked the weather forecast and saw that this wasn’t due to happen until the Sunday – which proved to be completely spot on.

We were now starting to think that we might be in trouble, so plucked up our courage (remembering how they’d laughed at others who had the misfortune to get stuck up Holme Fen) and rang the Shotbolts. It was seriously crossing our minds that someone might have to come out and tow us back. In fact Lyn was ever so nice and sympathetic, so that was all right. With the phone propped in the optimum – indeed the only – position for getting a signal, we waited for John to call back. 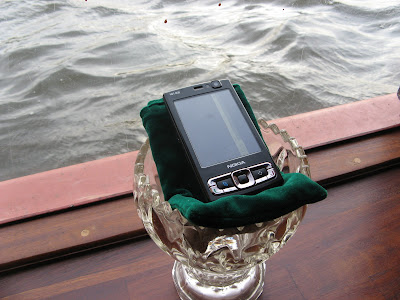 When he did, he thought that we’d probably picked up more weed than we thought (apparently by this time of year it hasn’t actually gone away, it’s just sitting on the bottom), and had also probably picked more of it up again in our attempts to move subsequently. He suggested clearing it again, then poling the boat forward ten feet to be sure of being well away from any left in the water before putting it in gear again. So this is what we did. It probably wouldn’t have seemed any more successful – the wind was still doing its worst pushing us onto the bank, but through a combination of luck and Sebastian’s superhuman poling, we got the front pointing out while there was still water under the back, and we were, finally, off. 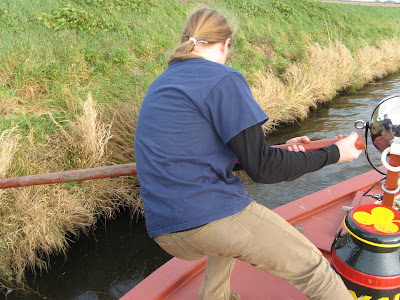 Once we were in the middle of the channel and under way it was clear there wasn’t a problem, the prop was working fine. We hardly dared stop, however, for fear of it all happening again.
Posted by S at 11:49 AM

Did you honestly think we would come to your rescue the day after John's birthday!!! Can you imagine just how big the hang over was