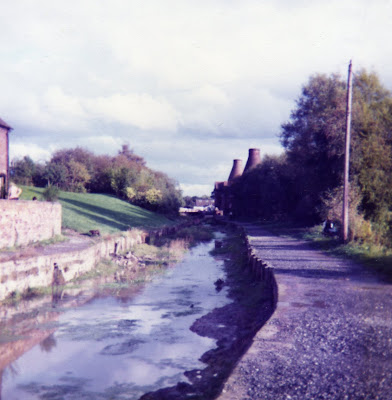 Twenty five years ago my A Level History (British Economic and Social 1733-1945) class went on a trip to Ironbridge, to see the famous, ahem, iron bridge, and visit the museum.

Until now the trip has stuck in my mind largely because it was the first time I'd voluntarily been on the tube since, at the age of six, following a bomb scare and a particularly nasty public information film about escalators (I wonder just how many nightmares and neuroses those films have been responsible for over the years), I developed a quite serious phobia of the tube in general and of escalators in particular. I had in the intervening years been dragged down a few times, if not kicking and screaming, then paralysed with terror, by my mother, but now - aged seventeen and with teachers to impress - I gritted my teeth and did it. As these things often go, I now love the tube. It's only very very recently though that I've been able to stand on an escalator without gathering my skirts about me in fear of its nasty sharp pointy teeth. (One of the mottoes that sees me through life is 'stupider people than you have survived').

Anyway, I recall that it was a very enjoyable outing (see, I've always liked old industrial stuff) but I was looking through my boxes and boxes of old photos earlier and I found one taken on a bit of the trip that I don't remember at all.

I had written on the back: Disused canal, Shropshire 28.9.82 and something that looks like (I have always, reputedly, had terrible writing. I think it looks quite nice, but I suppose I must grant that that doesn't necessarily make it easy to read) Bottom of Hay I. Place. Now I have no idea whether that refers to the location where the photo was taken or to my system for filing it, or indeed whether that was actually what I intended to write, but I offer it up for what it's worth.

We went by train, so we can't have travelled far afield. This must therefore be somewhere near Ironbridge. It is surely also a fairly distinctive location. So can anybody shed any light on where it is, and what's there now? I really would like to know.
Posted by S at 4:01 PM

Wow! That's amazing, especially as I have absolutely no memory of it. Am off to pore over maps and books now.