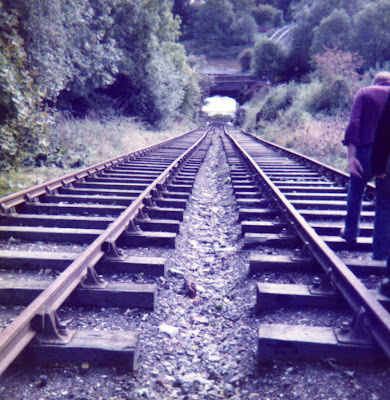 I suppose twenty five years is quite a long time to expect to remember something, but I do wish I'd paid more attention at the time. Following Richard (Inveterate Swearer) Fairhurst's illuminating comment earlier, I went a-Googling for the Hay Inclined Plane.

The website of the Ironbridge Gorge Museum says that the inclined plane was restored in the 1980s. I was there in 1982, so I suppose that means that it might have changed a fair bit since then. I've found lots of pictures of the plane itself, but none of the area in my first photo.

When I saw the pics of the inclined plane, I realised that I had a photo of that too, in my album. I dashed out to fetch it, and when I slipped it out of its photo corners (can you still buy them?) I saw that I had written on the back: The Hay Inclined Plane. Ironbridge. 28.9.82 (Right: Chris Collard). As if I could forget Mr Collard. Or indeed, Mr (Alan) Wrigglesworth (left arm just visible), who also accompanied us and was, in fact, the history teacher. But to my eternal shame, I do not remember anything at all about the Hay Inclined Plane or the canal.

But, I was there. I've walked down an inclined plane. Lovely words.
Posted by S at 9:47 PM

Oh, there were other photos of them too - Mr Wrigglesworth really was rather sweet after he shaved his enormous beard off.

I don't think it's changed much since - we were there the other year and it still looks pretty much the same.

Hello Sarah, Alan Wrigglesworth (of one arm in the picture fame) here. Just found this on the internet. Be nice to hear from you.
Regards. Alan W.