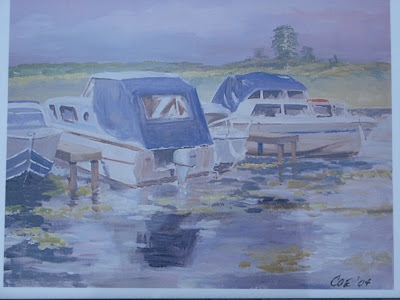 Oddly, we have very few - well, to be honest, no - photos of Helyn on the water. I can only account for this omission by the following factors:
1. While we were using Helyn, we didn't have a digital camera. But, on the other hand, we still had plenty of other cameras, and I've got plenty of photos taken from the boat, just none of her.
2. When you're poodling along a canal, it's easy to hop on and off and take photos of the boat in attractive locations, in locks etc etc. When you're on the Middle Level, the Thames or the Wey (all the places we went with Helyn) it's not so easy. That, however, still does not account for why there are no photos of her on her home mooring at Floods Ferry, the Town Quay at March, Well Creek or any number of other stopping points where there surely must have been firm ground to stand upon.
3. When we had Helyn we were new to boating, and needed all our attention just to do the basics. But again, there were usually three of us, and we did stop and tie up sometimes.
4. Can it be that Helyn just didn't strike me, until it was too late, as particularly photogenic? That it didn't occur to me to take pictures of the boat. I suppose I didn't know then that I would be blogging, and maybe I didn't think that we would use Helyn for such a relatively short time (about two years).

All the more reason to get her out onto the Ouse this summer and get some nice photos then.

Someone recognised her charms though. Peter Coe, an artist who moored his narrowboat at Floods Ferry immortalised Helyn in acrylics in the summer of 2004, and kindly gave us a copy. I hope he won't mind me posting a photo of it (I tried to scan it, but it came out dreadfully), as it's just about the only picture of Helyn we've got. That's her in the middle, by the way, bow into the bank.
Posted by S at 2:51 PM

poiWe owned Helyn from 1993 to 2003.Have loads of pictures of her.I made the alterations (hardtop, internal etc).We had a lot of fun with this little boat.We bought her at Pyrford marina,river Wey,where we used her for a few years then moved her to Pentonhook where we sold her from in 2003.