Oh, what's that on the drive? 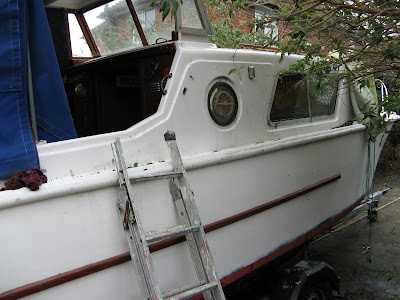 Why, it looks like a little boat. It's been there so long I'd stopped noticing it, apart from being careful not to drive into the trailer. But yesterday, being as it was so nice and mild, Jim decided to start getting to grips with Helyn again. He pumped thirty buckets of rainwater out of the bilges, and then set about completely emptying the interior, so that the air can get to it. Helyn still has some of her original 1970 cushions in their blue vinyl covers with white piping, including the triangular one that goes under the foredeck. She also has the original, tri-folding ply-and-grp triangular piece that goes in to make the bed up. I'm particularly proud of that, even though it does have a tendency to turn on you and pinch your fingers if you're not careful.

I clambered up to have a look and was slightly shocked to realise that we hadn't even emptied the food cupboard when we brought Helyn home in November. Er, November 2005. It was still full of tins of beans and soup (which I've rather optimistically transferred to the kitchen cupboard in defiance of the rust spots and 2006 sell by dates) and boxes of cereal (which I haven't). Very Marie Celeste. Thankfully we took the toilet out long ago to be a spare spare for Warrior, or who knows what we might have found there. 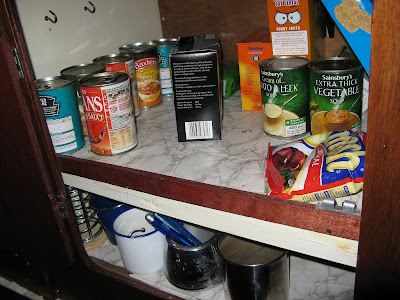 Removed all sorts of other treasures too, most of which has been washed and will be put back (dinky little draining rack, melamine crockery, cutlery, bits of wire for poking the outboard with), some of which will transfer to Warrior (handy lamp, tin mugs, very useful non stick interlocking frying pan-cum-cake tin things). Took up the vinyl flooring (we never quite finished fitting it in the first place, but it did beat the purple carpet that we got with the boat) for airing purposes. All has been scrubbed and is smelling remarkably fresh already. Now we just need some dry air to circulate around the south coast.
Posted by S at 7:40 PM