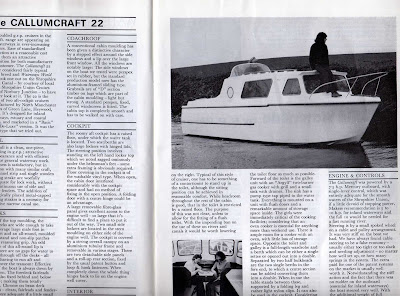 Callumcraft is not a well known make of boats. Over the time we've had Helyn I've looked out for others and have seen about three advertised for sale and maybe the same number out on the water - including, if I remember rightly, one at Wheaton Aston. When we first saw Helyn the name rang a vague bell as one of the manufacturers mentioned by Graham Booth in The Inland Boat Owner's Book under 'other reputable names from the past include...'

So guess what was the very - the very - first boat ever to be reviewed in Waterways World? Only the Callumcraft 22, i.e. our very own Helyn. Volume 1, Issue 1, page 14. There are so many treats and revelations (e.g. boating is not getting more expensive. Boating has always been expensive) to be found in my complete set of back issues, but this is a very good and apposite place to start.

One of the many things one notices is that the reviews were a lot more rigorous back then. Nowadays the reviewers struggle to find anything critical to say, and then it's invariably a minor point; boat reviews in the glossies today are much more a 'through the keyhole type exercise' than anything like a useful buyer's guide - especially as the boats reviewed are nearly all bespoke.

Back in Spring 1972 it was a different matter. Here was a fairly mass market boat, and the reviewer finds a fair few things to fault it on - although it fares better than many other boats reviewed in subsequent issues.

The boat they took out was the de luxe version, supplied by local agents Shropshire Union Cruises of Norbury Junction; the boats were actually manufactured in Lancashire. One thing that strikes you about all these early reviews - and indeed the adverts - is how many berths they managed to squeeze in, theoretically at least. This 22 x 7 foot boat was deemed perfectly capable of sleeping six - the only caveat raised by the reviewer being that the dining table would be too small to seat that number. And 'the girls' were very critical of the lack of an oven, standard equipment (even on the de luxe model) being only a two burner hob and grill.

From the outside this is clearly recognisable as our Helyn, despite the fact that Helyn has been modified with a folding windscreen and solid cockpit roof. On the inside, Helyn has lost at least two berths in favour of storage space, fridge and cooker with oven (so presumably 'the girls' would be happier, although I can't recall that I ever used it), and she has been endowed with a far more generously sized table made by us (well, OK, Jim) topped with genuine Formica which took a lot of tracking down, but we wanted it to look authentic! It is good stuff anyway; there's nothing else quite like it. It's still widely used in industrial settings, but no one supplies it in small quantities any more.

I think that with the de luxe version you got such fripparies as cushions and the cockpit canopy - whatever, it was enough to more than double the price. Anyone want to have a guess at what it cost back in 1972?
Posted by S at 7:38 PM

Delighted to see this. I keep a Callumcraft 22 at Linton on Ouse near York. they were basically prototype Normans (North Manchester Plastics). I'm guessing c 1968 - 75 for date of manufacture. are old enough to count as "Classics", do you think?

Sorry about the missed capitals ... the system kept throwing me out and putting me off my stroke. Seriously, if anyone knows anything about Callumcraft (who was Callum, for example?) I'd love to hear.

This takes me back.
I was the works manager for Callumcraft for many years. The company Callumcraft was formed by Cliff Dunn one of the partners in Norman Cruisers NORth MANchester Plastics (NMP) after the company split up and using the name of his youngest son Callum. Helyn the 22" shown was a new design to get away from the raised box foredeck Norman shape and with its lip at the front of the cabin was, at the time, a front running design feature, needing a split mould for laminating & stripping purposes.
The factory in Green Lane Heywood was I recall a happy place to be, usually with the sound of barbers-shop emanating from the line of 17"s, 22"s and the occational 25" centre cockpit. I remember the workforce had pride in their work, each joiner having made maststeps of their own design which sat on the cabin roof of the boat they were fitting out so I new who was where. When the boats were complete and sat on a trailer ready to be delivered, the workman who had fitted it out could not walk past "his" boat without taking a polishing cloth and giving it another qick wipe. Nice to see!
Happy days.