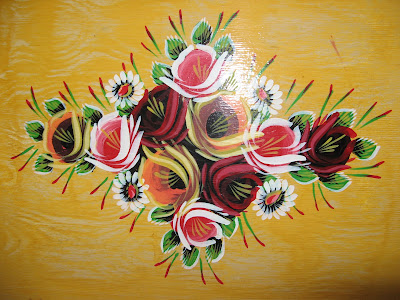 Red Dragon Man was asking about Warrior's roses. There are 163 of them altogether, fifty five in the bathroom, a massive eighty four in the back cabin, and a dozen each on the front and side hatches. They are a little bit different from the roses you usually see, although clearly within that tradition; they're slightly more blowsy, more exuberent. I really like them. 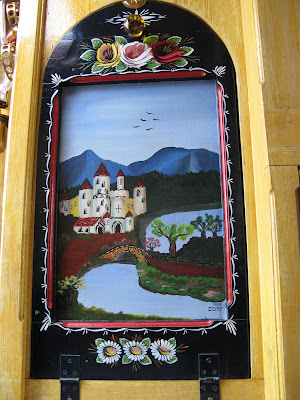 All Warrior's roses and castles were painted in 1995, when the boat was new, by Martin Duiker, who I believe was a local (to Bill Fen) artist. You can see his signature, and the date, in the bottom right hand corner of the table cupboard. Apparently he always painted five birds in each scene to represent his five children. I wish I'd known that when I did my little bit of repainting (see below) and then I would have just put two in. Warrior was one of, if not the, last boat he painted before leaving for Australia, never to be heard from since. When we went to the George at Forty Foot last summer and looked at the visitors' book, we saw not only where he'd signed it, visiting by boat, but also a castle scene he'd sketched in it. 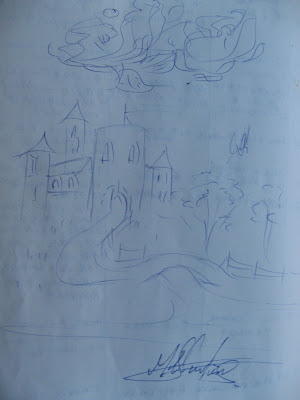 The painting has stood the test of time really well. Even on the hatches, exposed to a lot of weather, where I don't think they'd received any attention over the years, were just about recoverable when I finally paid them some attention last summer. I gave them a really light rubbing with very fine sandpaper, and (so far) a coat of Craftmaster varnish. They need some more coats but it kept raining. If you look closely you can see that it's not brand new; there was some cracking, but that just adds to its character and hopefully if we keep up the varnishing regime things shouldn't get any worse. 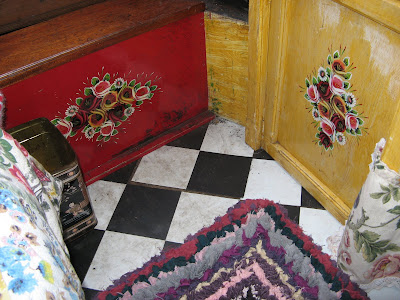 Another problem is that a previous owner, when he painted the boat (maroon) got quite a lot of splashes and drips on the decorative painting. Ditto green paint on the coal box - gallons of it - when he painted the stove green (why oh why oh why?). I've tried rubbing these off, again, very gently, but it's impossible without damaging the original paint, so those speckles will just have to be lived with. One of the panels on the front hatches was quite badly damaged, with a great big dent in the wood. Jim filled this and made it good, and I repainted the top half of the picture. It was fun to do, and I was quite pleased with the result (having no talent whatsoever in that direction) but it doesn't look much like the original.
Posted by S at 3:06 PM

Thanks for the lovely pics and info Sarah. That is a LOT of roses, I wonder how much all that artistry cost originally?

Pleas can we see some pictures of Warrior's castles as well?

Hello
I am the man who painted the Roses and castles on Warrior.It was lovely to see them again.
Martin
email
M.duiker@mypostoffice.co.uk

Australia.maybe John had been in the George to long that day

Martin passed away on 8th April. It was sudden and totally unexpected. He was 74/years old.