Do you remember your first ... 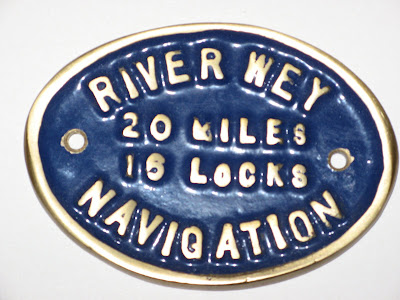 ... lock?
Thinking back to Helyn's travels, which were really our first boating experiences (I'd been on the Broads with my family as a teenager, but certainly came across no locks there. We weren't even allowed near the low bridges.) I realised that the first ever lock we went through would have been Chertsey, but scary as they - and their keepers - were, I'm not going to count the manned Thames locks.

The first lock we ever worked our own way through was therefore Weybridge Town Lock. I remember very little about this. It was November, and it was probably raining. I think we met some people who helped, or at least advised, us ... does that count then? They owned a narrowboat, but at the time were out walking with, I seem to recall, a small dog.
I've just indulged myself with a Canalplan virtual cruise of the River Wey, and there's a picture there, of New Haw Lock that brought back memories, of grubby gongoozlers (just what we did not need) and a fearsome weir. I remember going past Pyrford Basin, and wondering what would happen to the river if all those boats decided to come out at once (little danger of that ever happening, I guess).
I can not recall which lock it was on the Wey in which I manned the boat for the first time and left Jim on the bank, and as the lock emptied so many floating leaves got clogged round the prop that the boat just wasn't going anywhere. As we drifted gently about, I was paying more attention to Jim jumping up and down on the fast receding opposite bank like a cartoon character. Not having much idea of what was going on, in desperation I finally shoved it into reverse which, thankfully, worked like magic; the boat was suddenly operational again, and I was able fairly coolly to steer us back. Took ages to work out what had actually happened though.