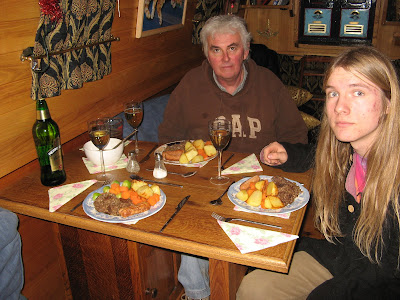 I'm not entirely sure why they both look as if they're going to meet their doom; the Xmas dinner was very nice. We had festive nut roast stuffed with traditional Paxo, veggie sausages, roast potatoes, carrots and sprouts (me only, no one else likes them), bread sauce and gravy followed by Xmas pud with custard and brandy cream washed down with local (to home) Merrydown vintage cider. Can't remember what sort of cooker Warrior has, but it's the same as everyone else has, original to the boat, taken out and refitted in the new kitchen. Only the colour (brown) really gives its age away. It works great and it was entirely my fault that the potatoes weren't done quite at the same time as everything else.

Here is my secret for the best crispiest roast potatoes - forget all that pre-boiling, shaking them around etc a la Delia. The secret is not to let the fat cool down. So you get it really hot in the top of a hot oven, get your potatoes peeled and then dry them in a tea towel, then when you take the fat out of the oven to put the potatoes in, put it on the hob with the gas (or whatever) on under it while you lower the chunks of potato in with a pair of spoons and turn them over to get them all covered in fat. This way the fat stays hot enough to seal the potatoes; if it cools down it would soak in and make them greasy.

I expect goose fat is probably the best but I've never tried it. I used to use Cookeen but recently have taken to just using vegetable oil. It doesn't seem to make much difference to the cooking. A fat that's solid at room temperature is easier to dispose of though, she says with the wonder of hindsight. As it was, after dinner, I tipped the fat into the jug along with the leftover gravy and said, if I put this outside, it'll be solid by the morning and we can scrape it into the bin. But it wasn't. Although it had settled into interesting strata. So I had to decant it into an old plastic milk bottle which I'd just rather recklessly crushed (and if you rinse them out with a drop of boiling water first, they crush very flat...)
Posted by S at 6:47 PM

NO NO NO!
Parboil and shake first, and THEN put them into really hot fat as you describe.
That's the way to make the best and crispiest roast potatoes.
IMHO
;)

now im hungry! Hiya its Lisa here on the narrowshop boat. Just came accross your blog. I will add it to my blog friends and keep popping back if thats ok!?. We are a shop all year round and The Ice Cream Boat in the summer so you will spot us no trouble!. We are heading to Chester in next few weeks then in May London canals. Take care for now luv. Lisa http://thenarrowshop.blogspot.com/ do feel free to viit my blog sometime. Thanks. Lisa