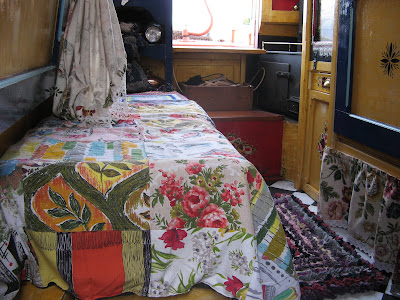 Jumble sales, sadly, are not what they used to be. When I was about twelve, and my friend Penny first suggested I accompany her to a jumble sale, I was horrified, like the good lower-middle-class girl I was meant to be. But not half as horrified as my mother was when I came back, completely hooked, and with loads of rather indiscriminately chosen old clothes. I was just amazed at how much could be acquired for so little money, and at the treasures that people threw away. I also honed pushing and elbowing skills that have stood me in good stead in numerous situations since.

I continued going on and off from then on, and took it up really seriously again about fifteen years ago. This time it was my turn to take a horrified Jim and get him hooked. More discriminating now, we have got some lovely things over the years, for house, boat and selves. For a few years we were going to at least one, and sometimes two or even three jumbles every Saturday; we planned our weekend around the announcements in the local paper. Then we got a boat and had something else to do at weekends, and also gradually began to notice that jumble sales were becoming fewer, and the stuff at them less worth going for. The general consensus is that the rot started to set in with the rise of car boot sales, but not everyone wants to stand in a cold car park for four hours to make a few quid, and many were still happy to have some local cause come and take their cast-offs away. I think it's probably Ebay that's had more effect - the car boot without standing in the cold. Also charity shops - no waiting for the stuff to be picked up, just drop it off at a local shop. And, more recently still, Freecycle - which is a great idea, and we're using it a lot ourselves to get rid of stuff because it's so quick and you know the stuff's going to someone who wants it (and you get to meet lots of nice people).

But there will always be things, surely, that only I could want? Like, for example, a very small patchwork bedspread made from scraps of 1950s curtains ... well, I certainly found a good home for it.
Posted by S at 4:30 PM

I so agree with you on this posting. I loved routing around in jumble sales, but I have not seen one advertised for a long time now. I am not one for car boot sales really. But I love charity shops as does Keith. Thankfully Stone has 7 or 8 I think at the last count, although some are way more expensive than others.
I am always looking for things and will make good use of old bits of material etc.
Have a good week.

Our family are Charity Shop goers

My daughter can not pass one (12 years old) She can have almost the latest fashion, on small change.