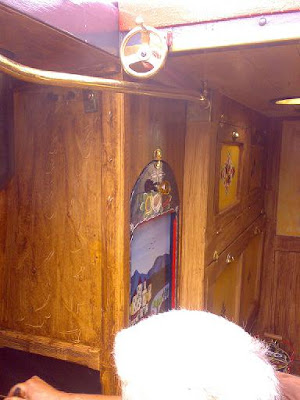 Clearly the reception is much better in Northampton, so I have been getting detailed reports. The rain threatened for today didn't materialise, but Doddington Lock is still reversed for the time being. However, if it still looks set fair tomorrow I think the plan is to proceed in that direction so as to be in pole position when it does re-open. Surprisingly (to me) only a couple of other boats are waiting along with Warrior and Lucky Duck. I hear that Northampton is actually rather a nice place, as well as being well provisioned with supermarkets, and today the combined crew took a pleasant perambulation in search of the water point.

Jim has been making constructive use of all this enforced spare time by graining the back cabin. Now, it was already grained, quite crudely, in a very yellow pine effect. Onto this the wonderful roses were painted. But the framing around the panels, whatever it was originally, had at some point been done over in a royal blue that didn't go with anything else and just looked pretty awful. So the idea was just to redo those parts, with darker, contrasting, graining. There has been a bit of an ongoing controversy about just which other bits - including some tatty and/or damaged panels - should also be redone, with me holding out for keeping them as they were and Jim wanting to redo them. Well, he's there doing it and I'm here, so I may have to concede gracefully on that point. I can see it might be quite addictive... well, I'll just do that little bit more... and that bit.. and... oops, I've done all of it.

Anyway, thanks to the wonders of mobile telephony, this afternoon I received from James a photo of the work in progress. It's looking pretty impressive. I think that must be Jim's head at the bottom. I wonder if he'll come back with a big white beard...
Posted by S at 8:04 PM

Ooh, if Jim has mastered graining, I can put him to work in the back cabin on Melaleuca. Of course, he needs to get back to Ramsey first.......

I'm surprised that you've not been summoned to deliver a Volvo-sized Red Cross parcel to the stranded caravan.

These blog entries are really starting to remind me of a certain reality TV programme:

FX: Geordie accent.
Daay 44, and Jim is in the back cabin, Graaiinin. Meanwhile, James and Amy are scoutin for a waater point to fill up the Lucky Duck.....

You do realise this means nothing whatsoever to me? I have not had a telly since Christmas 2004, and thus have mercifully been spared.