The wanderer returns. And brings washing 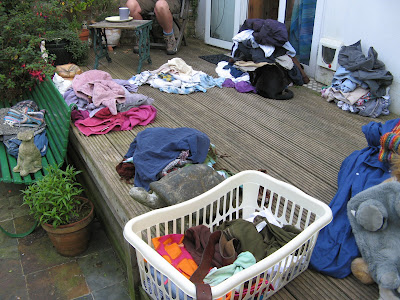 It occurred to me on Saturday that the neighbours were probably thinking that I'd either sent Jim packing for good, or contrived to drown him somewhere, as he failed to reappear for so long after I did. But to confound them, he returned yesterday, after 52 days, 727 miles, 363 locks, and 266 running hours. Warrior performed without a hitch throughout, the only mechanical breakdown of the entire trip being a leak in one of the tiny oil feeder pipes.

Now, I have a slightly guilty secret. I really like doing washing. Or at least, I like sticking dirty stuff in the washing machine and taking it out when it's clean and hanging it out on the line. I find it a very satisfying sight. I like the smell of washing that's been dried outside and especially the smell of washing that's been rained on. A line of colour coordinated raiment flapping in the breeze brings joy to my heart. (Yeah, well, feminists do knitting now and everything.) So all these weeks I have been looking forward to Jim bringing home big heaps of filthy washing, which we piled up outside so as not to make the house untidy. 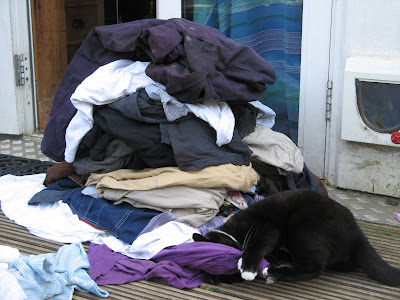 He also brought back a further 400 photos, from which I shall shortly be making a selection. We tempted Aaron over last night with the promise of a celebratory beer, and he found himself sitting through a slideshow of the first 500 or so pictures of the trip.
Posted by S at 9:08 PM

Looking forwards to seeing pictures of the WarriorDuck!

It turns out that, in order to do our washing, we have to take the boat from Upware to Cambridge, so that will probably need to become a weekly trip.

By the way, if you wanted a spare washing line I'm sure I could rig you one up out of cabin shafts and mooring rope!

? I thought you were mooring at Cambridge, James.

Ah. I should have read the Duck's blog first. Ignore me.