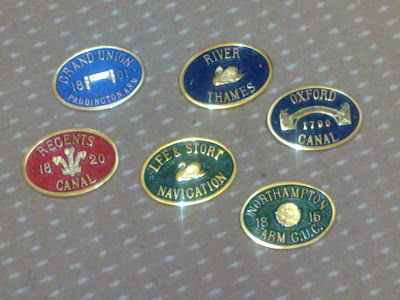 Tricky subject, plaques, and one which causes me great inner turmoil. On the one hand, they're as naff as all get out; on the other... well, I like them. They appeal to the obsessive cataloguer within me. I like their solid cast brassness. They give me something to collect.

In my defence I can only say that I don't display them on the hatches for the world to see - still less, like a boat I saw in London, with them categorised into sections with wonky brass-letter headings (canals, rivers, arms and flights) but discreetly on the corridor wall, like a faux-modest star putting their Oscar in the guest loo. So far I have amassed them only for waterways we have actually travelled, which includes arms, but not for locks, tunnels and other landmarks; I think they're covered. We have one for a Shroppie festival that Warrior went to without us; and, cheating slightly, we have Andante's Huddersfield trophies on Warrior - well, we did earn them. And one from the RN Rally last year and one from the IWA National. They are surely justified.

Possibly worst of all, most of our geographical ones haven't been purchased from darling little chandleries we've found along the way, but from the equally charming online Canal Shop. Go on, shoot me now. So thus it was that a rather heavy parcel arrived last weekend, containing the six plaques that I thought we'd earned on this last trip. The Northampton Arm, of course we'd covered before, but never got the T-shirt. The Oxford is justified now we've done the South as well as the North. I have not got one for the GU, and shall not, until I have covered every inch of the main line. But I did buy one for the Paddington Arm, to commemorate our wrong turn out of Little Venice which saw us make an unplanned traverse of its entire length. (What's this then? Dunno. Looks like Paddington Basin. Huh. Not Camden then); and one for the Regents Canal. The Thames one of course was thoroughly earned; the Lee and Stort... well, I owe it a Stort, but couldn't get one for just the Lee, and I thought we should mark having made it all the way to Hertford.

So having made my special pleading, I hope I'm forgiven. They are such lovely things to collect. Perhaps it was because I was never a Brownie, but I still covet the badges.

Watch this space - the latest report is not yet in. Interim reports inform me that the Duck has suffered a further mechanical setback, and Irthlingborough Bridge has successfully been negotiated.

Later: Full report from the Duckies here
Posted by S at 6:37 PM

Hi Sarah
My boat came complete with an array of canal plaques inside the engine room, but still cringeingly visible when my stern door are open. I've now actually cruised most of the canals featured there but I can't stand em! You are welcome to them all but if I remove them, I'll have a load of holes to fill in!
p.s I only got one Brownie badge in years of not-trying-very-hard: the looking after animals one. I think that just entailed feeding your dog.

The thing I really can't stand is ribbon plates...