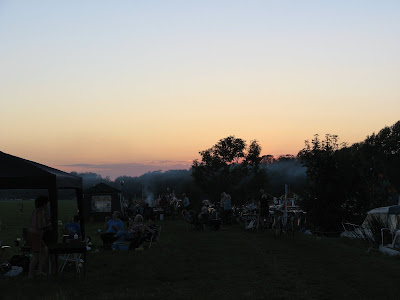 Remember Lee, the converted blue top we met in Cambridge? Well, they're here, and Toni and Mark came by and invited us to a barbecue this evening. I made some of my famous (well, not really, but they should be) vegetable kebabs and off we went. We had a lovely evening with a gang of the Cambridge boaters, most of whom had brought their boats. What a lovely community it must be there.

Mark took me on board and showed me Lee, which was lovely. They did the conversion themselves, having bought it with an open hold and an EA (well, NRA I suppose) cabin. It still has its engine (albeit not the original Harbourmaster) mounted on the stern. They bought it from the EA, who had previously been using it on the Thames to empty the effluent tanks of lock keepers' cottages. How splendid to get a boat straight from working like that, and to know that bit of its history.

Mark showed me photos of them bringing it from the Thames to Cambridge, and I'll post some when I can. The best thing about this whole lark is the almost instant friendships (and of course emnities) that you can make - without worrying about how you're going to sustain them, or whether you want to.

As we walked back from the barbecue just now, past all the other people's barbecues, already knowing so many people to say hello to... the full moon was rising over the festival site, and the smoke and/or mist was hovering a few feet above and around the edges of Hemingford Grey meadow... magical.
Posted by S at 7:21 PM