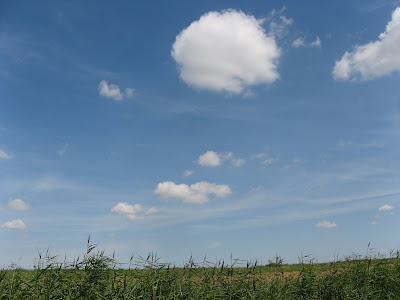 At (or shortly after) 9.30 this morning we were locked through Stanground by Tina, and left the Nene for the Middle Level. The Nene was OK, but I didn't really enjoy it; it didn't grab me, and I thought that perhaps I was now so taken up with the canal system that the Middle Level might have lost its appeal for me too. Happily, this was not the case. As soon as we were headed down Morton's Leam (welcomed by the familiar sight in the distance of the McCain chip factory) I was bitten by its magic again. I don't know why; it's every bit as boring as the Nene; less pretty and more agricultural. I suppose it must be the history, again, and the mystery; the other-worldliness of it. We saw a maintenance barge operated by the Middle Level Commissioners, and a digger from the Fen Ditching Company - deny the romance of that if you dare.

As the afternoon sweltered on, with just the slightest breeze sussurating in the reeds, the sky got bigger and bluer, we got browner and pinker, and it was all just lovely. We were following Temeraire and Tenacious, a pair owned by Ian McKim Thompson of Russell Newbury, and they made a lovely sight in the distance.

Then at about half past four, we turned into Bill Fen Marina at Ramsey, owned by John Shotbolt, the builder and first owner of Warrior. Nervously we awaited the verdict of him and his wife Lyn on what we'd done to their pride and joy (because apparently they only sold the boat very reluctantly, because they were badgered to do so - and then the purchaser sold it on after only a year or two.) 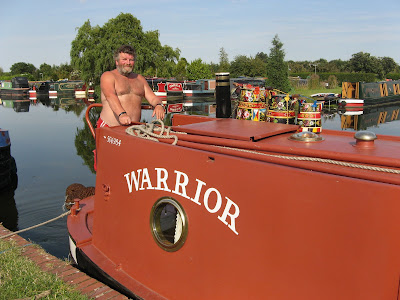 Despite being a bit shocked at first by the paintwork (I hastened to assure them that it wasn't us who had removed the original dark blue), I think they were pleased and feel that the boat's in good hands. So much so that we're going to the pub with them later this evening! Tomorrow we may just stay here for a rest, pop into town, and otherwise do fairly little. We then have to decide how to spend the rest of our time here on the Middle Level, before going through on to the Ouse next Thursday.
Posted by S at 5:27 PM