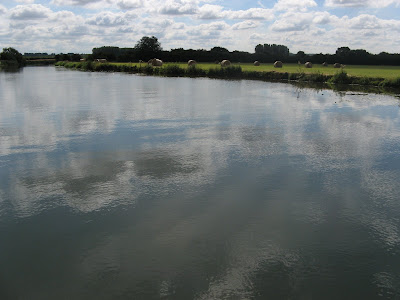 No, not a plug for the mag this time. Rather, a musing on the relative merits of two types of waterways. Is canals vs rivers really the most significant dividing line? It seems so to me at the moment. Having started boating on the Thames (well, OK, on the Broads, if you want to go back to my teenage years), then the Wey, then moving on the the Middle Level (back there tomorrow!), and only after all that getting stuck into canals, I've been surprised to find how much I'm missing the canals. It's not that they're 'easier' or feel safer (though both may be the case); they are more interesting (to someone whose interests lie more in history than geography); there is more camaraderie; there are more interesting boats; there is more to see, and there is just more atmosphere.

Yes, I admit that after the first day the river Nene was very pleasant; wide, pretty, green, trees, fields, more trees, more fields, very old bridges, churches. But where are the derelict factories, I find myself asking? (Though there was one at Northampton).

I have also formulated a new hypothesis which we will be testing: fisherman on canals are relatively (and it is very relative) cheerful, while those on rivers are unremittingly miserable.

Today passed without any excitement whatsoever. No major rows, no broken crockery, squished chimneys or collapsed table cupboards. I polished off the last ten Nene locks (and I will not be returning this way without one or other son; although I suppose going upstream isn't quite as frustrating, as you don't have to fill every bloody one first). I can now not only step down onto the roof, but can even climb down a lock ladder, to save having to be picked up later.

We have arrived safely in Peterborough, where the EA have at last pleasantly surprised us, with a water point with its own hosepipe, and a free (if you don't count the £144 temporary licence) pumpout, of which, of course, we made full use. It thrashed about quite impressively, but I don't think it was anything personal.

We are booked to go through Stanground Lock and onto the Middle Level at 9.30 tomorrow morning, and shortly after that we will, hopefully, be taking Warrior to Ramsey for an emotional reunion with its builder and first owner, John Shotbolt, and his wife Lynn. In preparation for this we have been trying to get it looking its best tonight, and will continue in the morning. Tonight we are moored just past the junction with the Stanground Branch/Mortons Leam, on a stretch with no speed limit which is used for water ski-ing, apparently, and, we can say from first hand experience, jet ski-ing. Makes the water slap about under the boat quite impressively. 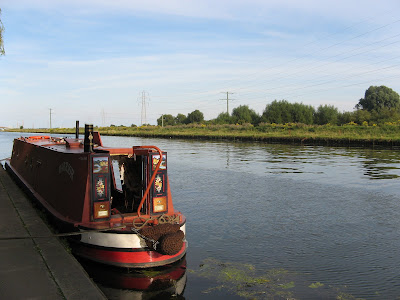 So goodbye Nene. It was nice, in the end, but I'm not desperate to return.
Posted by S at 8:38 PM