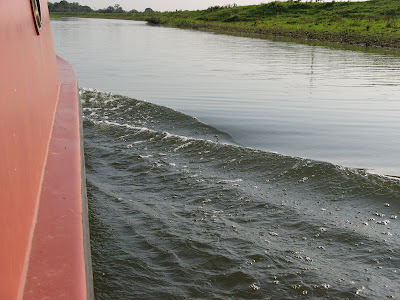 Today at last we braved the 100 Foot. We first got the idea when it looked as if the Ouse might still be blocked by the derailment and that would be an alternative route to the festival. As it turned out, the Ouse was open to navigation in time so we came that way. But we were quite taken with the idea of the 100 Foot (well, I have always been taken with the very idea of navigable drains, and Jim pricks up his ears when he hears the word tidal) so decided to come back that way. I think it's meant to be a bit trickier the way we did it, because you have to go against the incoming tide, but it wasn't at all difficult.

You have to get the timing right; leave too early and you meet the tide too near the sea so it's too strong (apparently there's quite a big bore); too late, and the water's too low by the time you get to Salters Lode, the lock that leads back onto the Middle Level. But just ring up the Salters Lode lock keeper, tell him what day you want to come, and he'll tell you what time to leave. He told us nine o'clock, so of course we left at eight thirty. We knew there were other boats intending to make the trip, and were quite nervous of not being able to get straight into the lock and having to hold off in the tideway. We were glad we'd left early, but in the end not for that reason.

We saw no one else on the 100 Foot; we knew of one boat which left before us (hello Grumpy Bear!), but they weren't going through Salters, but through Denver Sluice and back onto the Ouse. It wasn't frightening; but it was interesting. Despite being straight, and described in the books as featureless, I thought it was lovely. There were lots of birds, and for the first time we realised we should have brought the bird book. The tide wasn't really noticeable, except for the fact that our bow wave got bigger, then diminished, despite no change in engine speed; and then the muddy banks became higher and higher as the water level dropped. At times though I could swear I could smell the sea.

The tide was much lower when we got back to Salters Lode than when we left there last week, and the mudbank outside Denver Sluice was clearly visible. We had no problem turning into the mouth of the lock, and nestling there while the gate was raised, then in we went; the water level dropped by about a foot, the gates were opened, and we were back on the Middle Level. We tied up at Well Creek (just under an hour further on) and waited for the other boats to come by; the lock keeper had told us that he was expecting at least seven.

It was a good few hours before any arrived, then there must have been about a dozen in convoy; I think they had come all the way up the 100 Foot like that (some of them at any rate). So that's one reason I'm glad we left early; we had it all to ourselves, in all its marvellous empty vastness. The thing with Salters Lode is that only boats under about 56' can be locked through; we were a fairly snug fit. Anything longer has to wait for the window when the tide is level with the water on the Middle Level, and then they open both ends at once and boats come straight through. So that would be why the long ones all came at once, but I'm still not sure why a lot of shorter ones were in the convoy too. Nor can I imagine where they'll all be mooring tonight ...

We're aiming to get back to Bill Fen tomorrow; it'll be a good day's travelling, via the Forty Foot Drain, Popham's Eau, and the Sixteen Foot Drain - a different route to that by which we came.
Posted by S at 6:27 PM

We too decided to try the hundred foot as a result of the derailment & as it happened it gave us extra time to spend down the Ely end of the Great Ouse after the festival before returning to Bedford.

Thanks for your company in the pub at Earith - on Wednesday morning we were up with the sun (and the geese, ducks, swans, herons and THE seal) - ready & waiting at Hermitage lock at 8am.

So we left there through the bridge and down the drain at 8.05am and 4 hours later were moored up waiting to enter Denver Lock and back into the Great Ouse. It was very pleasant - not great high banks either side as I had envisaged we could see across the fields to the wind turbines and the cattle grazing. We didn't see another boat until we got to Denver (you were of course an hour behind us!) neither did we see any "dragons or dead cows or shopping trolleys" in spite of all the stories about going down the hundred foot.

Once back through Denver we ventured down the Little Ouse to Brandon, then back to Ely, before stopping in St Ives and St Neots and back to Bedford on Sun 2 Sept.

Glad you enjoyed your stay on the River Great Ouse & maybe see you again soon.