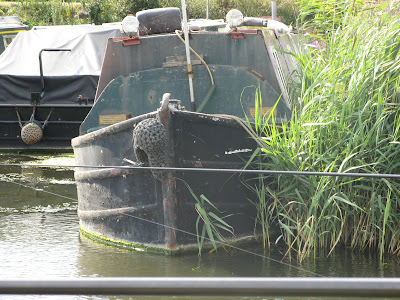 There's this boat I spotted last week at Bill Fen; it stood out for a start because it was one of the few full length ones there. Something familiar about it? Or just an early, basic leisure boat (at 70'?) John and Lyn didn't think it was anything, but having trawled my photo album for comparisons I'm now convinced it's a blue top. I've seen a few now (butties Kew and Dee on this trip alone; an unidentified one on the trip to Coventry; Collingwood going past Stretton, and of course Anne, which is (or was when I bought blue off it last year) trading - but I'm not aware of a fully restored one, in the sense of glitzified and 'as new' - perhaps no one thinks it worthwhile as they are admittedly rather unlovely.
Posted by S at 10:28 AM

Hi Sarah
Sounds like you’re having a great time boating. As far as the ‘interesting boat of the week’ is concerned you are spot on with recognising it as one of the 19 ‘Blue top’ butties built for British Waterways by E C Jones and Son of Brentford in 1959.
The names of these were; AWE, ANT, AYE, ELY, EXE, FAL, HAY, KEW, LYN, RAY, ROE, RYE, TOW, URE, WEY, YEO, LEE, ANNE, and BERYL. The last two being motorised. This order had followed British Transport Waterways original order for six butties that were built in 1957 by Thames Launch Works Ltd at Teddington, and were ALT, AXE, CAM, DEE, TAW, and WYE. (All incidentally named after rivers with 3 letters, I suppose to cut down on cost of sign writing!)
I have a great suspicion that the boat you spotted was in fact the converted butty ELY from the shape of the conversion the windows and as can be seen from your picture the original deck board (profiled to the fibreglass blue tops) is still in place.
You also mentioned in your blog having seen “Kew and Dee on this trip alone; an unidentified one on the trip to Coventry; Collingwood going past Stretton, and of course Anne,” just as a matter of interest, Collingwood was never a ‘Blue top’ boat even though it has them fitted now, these were put on by Birmingham & Midland Canal Carrying Company in the 1960’s for convenience like the sister boat they owned Anson as they both originally had canvas cloths. Again just as a matter of interest these boats were not liked by the boatmen as they did not swim well and the bottoms were not flat at the bows, but turned up causing them to ride up onto any mud etc. and easily get stemmed up. Boatmen commonly called these boats ‘dustbin boats’ or ‘bean cans’

I know, I know, I was going to come back and edit Collingwood out, and when I saw there was a comment I just knew it would be someone pointing out my error!!

Hi Sarah
We've just stumbled across this by accident. At first glance, the picture did look like Ely, but after looking at it more carefully we can tell you that it definitely isn't - unless someone has done a lot of work on it since we sold it ten years ago, and it certainly doesn't look like that is the case!
The windows are different, there appear to be side doors in the wrong place, and the same goes for a chimney.
It might be a Riverclass butty, but it definitely isn't Ely.