In praise of Blu-Tack (and other bits and pieces)

Now, we genuinely haven't been anywhere today; indeed, I have been recuperating from yesterday's leisure activities: 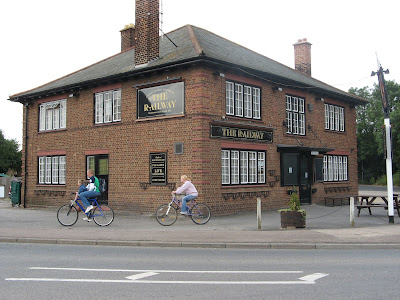 Jim has mended the table cupboard and sorted out all the bits and bobs repositories in the back cabin (where are the little brass thingummybobs? In the knife drawer. Where are the electrical whatnots? Try the knife drawer. etc etc). He has dismantled the sump pump (again) and removed from it something resembling a dead mouse (well, it wouldn't look much like a live one, would it?) but which is actually an impressive hair sculpture. He has cunningly reassembled the engine chimney so that the former top is now at the bottom and the former bottom is now a slot-in removeable section at the top (cue wags crying, do you know your chimney's upside down? We can take it). And we have had all the bedding out in an attempt to remove the last of the grit from it (not sure I'll be able to sleep without its comforting presence).

Apart from feebly waving a few pillows about, I've spent most of the day polishing off the latest Ian Rankin paperback (well, this is meant to be a holiday). I did walk into town this morning. It wasn't as long a trudge as I'd been led to believe (though trudge is definitely the word, over a road of hardcore, gravel and dust); about twenty five minutes each way - although not particularly picturesque. It seemed a long way to go just to get a paper, so I bought a new pack of Blu-Tack too. I cannot speak too highly of this miracle product (apparently not available in Germany, for some reason, if my informant is to be believed). Just some of the things it's used for on Warrior: 1. Anti-rattle pads for hatches etc - everyone else has little rubber studs or pieces of hosepipe over their rattly doors, but these look so ugly when the doors are shut (or in the case of the latter, when they're open). A good big lump of Blu-Tack does the job and can be removed afterwards. 2. Stopping things sliding off shelves. 3. Our horn is fixed to the roof with Blu-Tack. This is because it's actually the chrome one we bought for Helyn and is only temporary until we find a really nice one. It hasn't shifted yet! 4. Also used to prevent rattling of lids against teapots, handbowl against stovepipe, horse brasses against wall etc. 5. Putting up notices, labels etc. Sticking Environment Agency licence to window (wicked cackle) .... actually, that's not true; I used sellotape. But I bet Blu-Tack would annoy them even more.

There are probably more things I haven't thought of, and there is one proviso - it must never actually be visible. Also, although it's reuseable, I don't actually like handling used Blu-Tack, so I probably end up buying more new packs than strictly necessary.

Yes, well, I said it'd been a quiet day. Distinct lack of big Woolwiches round here, I'm starting to get a bit twitchy.
Posted by S at 6:38 PM