Come back BW, all is forgiven 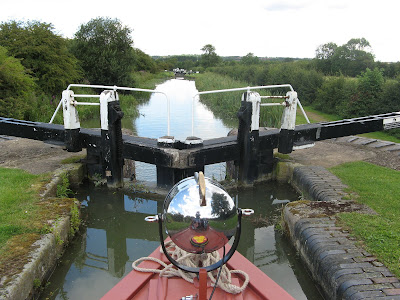 I think I mentioned before the Environment Agency licence that came with a seven-item set of instructions of how to affix it to the boat (well, yah boo sucks Environment Agency, I used Sellotape). And the ridiculously, meaninglessly detailed form we had to complete to get it. Well, today we ran up against the delights of EA bureaucracy again, when we sought to purchase an EA key. Not only did we have to part with four quid (fair enough) but we had to fill in another form. This is why I hate dealing with state bureaucracy in all its forms, because you know it's stupid, and they know it's stupid, but they've got you over a barrel. And they know it. BW, for all their faults (and I know in some people's eyes this is a fault) seem to be relatively laid back and sensible in comparison. Still, enough moaning.

A shorter day today, as we understand that moorings are harder to come by if you go any further, but plenty of interest. Loads of boats (see below), and the Northampton Arm, and the flight of locks that takes it down from Gayton Junction was surprisingly pleasant - surprising because I've not seen it mentioned much where people gather together to talk about flights of locks. But apart from the last few, all very lovely and green, nice views, fast (if leaky at the bottom) locks and, amazingly, hardly anyone else about. No one else coming our way, and three boats the other. 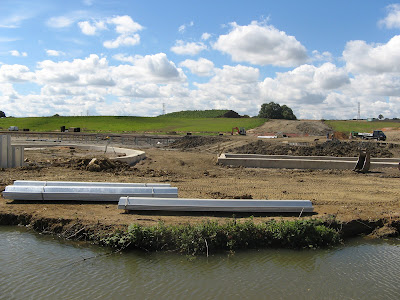 Saw a new marina being built too, at Bugbrooke, pontoons and everything in place in a big, completely dry, hole in the ground.
Posted by S at 7:33 PM