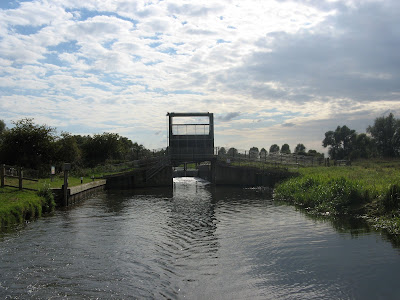 Knowing how they love them, as a service to the Environment Agency I have (free, gratis and for nothing) compiled a set of instructions for the use of locks on the River Nene.
1. Make sure you have had a good breakfast.
2. If travelling downstream, be aware that you will have to fill every lock before you can use it.
3. This is very laborious.
4. Have something substantial for elevenses.
5. Lock operator should alight at the ridiculously short landing stage provided and hope that there are no other boats waiting. If there are ... well, tough, really. Just drift about for a bit. But mind that weir!!
6. Lower guillotine gate. If this is electrified, think yourself lucky.
7. Debate whether it is worth opening paddle (very slow process) or whether lock will fill from the water cascading over the top gates. 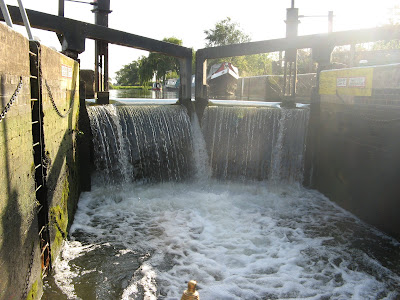 8. Open paddle.
9. Have a hearty lunch.
10. Close paddle.
11. Attempt to open gate. Wonder whether it's that the lock isn't full, or that you're just a weed. It's that you're just a weed.
12. Open paddle.
13. Open gate.
14. Seek first aid.
15. Attempt to steer boat into lock.
16. Hit gate. Swear. Open other gate.
17. Close gates. Closing gate on the off side will entail walking through a farmer's field. Nervously.
18. Slightly raise guillotine gate. NO!! I said SLIGHTLY!!
19. When lock is full, raise guillotine gate completely. You have to keep your thumb on the button at all times. The button is raised at a convenient height so that your arm will ache more than if you'd just operated a conventional lock.
20. Steer boat out of lock. Oh, did you get drips on you?
21. Lock operator must now attempt to find equally small landing stage at other side of lock. This may involve crossing a main road or nettle strewn field.
22. Guess which side landing stage is.
23. Collect lock operator - no, you'll have to be quicker than that!
24. Repeat thirty six times.

Well, as we were coming down the Northampton Flight, we met someone who told us we were in for a treat as the river was lovely ... sorry, I beg to differ. I don't have my dictionary of quotations on me (surprise surprise) but wasn't war once described as long periods of boredom punctuated by moments of sheer terror? Well, that was pretty much my expeiernce of the Nene today ... still, two more days to go, so maybe it will get better. The rural scenery is unexciting; there are vast swathes of mobile home and caravan parks, and the locks are horrible - and I speak as someone whose favourite activity (well, nearly) is locking.

On the plus side, we did get to utilise for the first time both the weed weapon (removing stout polythene and string from the prop) and the keb (very impressively fishing a large portion of a wooden pallet out of the third lock). I just hope we won't have cause to use our other equipment (life ring, anchor ...).

Anyway, bang on (CanalPlan) schedule, we made it to Wellingborough. In my favourite film (I don't get out much) Bill (or Joe) is given the choice of aluminium to Birmingham or wheat to Wellingborough. Let's just say I can see why he chooses the aluminium. We are tied up opposite the flour mill (yes, very redolent, especially the noise) and adjacent to a recreation ground. We have been to Tescos. And spent sixty six quid. Roll on Stanground.

Interesting boat of the day? Well, there have been hardly any boats at all, in either direction. Three, I think. And less than half a dozen moored. But coming out of Woollaston Lock, Jim shouted out 'Look! Over there!' What, I cried? Those bushes? That lowering sky? No! behind the bushes ... and lo and behold, is that a large Northwich? Sadly, by the time I'd worked out what I was meant to be looking at, I was rather a long way away for photographic purposes. So what do you think? 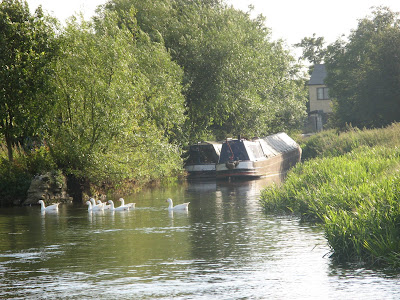 Just to make writing this more exciting, the table cupboard fell open rather violently yesterday and even since requires propping up with a knee while in use.
Posted by S at 8:21 PM

Absolutely brilliant... but you now owe me a keyboard 'cuz I've just sprayed coffe all over this one! :)

Keep up the good work with such an entertaining blog