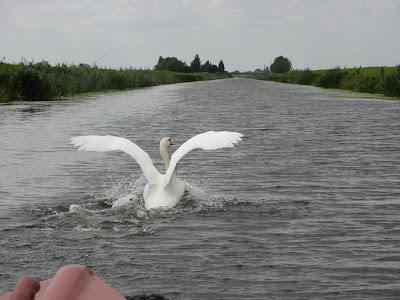 These waterways are marked on the map. They are entirely and officially navigable (albeit weedy). So how come, Messrs Imray, Laurie, Norrie and Wilson, the heights of the bridges aren't given? Huh? The heights of the VERY LOW chimney-eating bridges of the Sixteen Foot? (Famous last words: 'If it's not marked then it's at least two point fo...' CRUNCH!!!)

For readers' information, I'd reckon (without taking any responsibility whatsoever; remember, water levels can go up as well as down) you'd need an air draft of around 1.8 m or less to attempt that particular drain. You might not want to though, as I have to say, even to a lover of navigable drains such as myself, it's not very riveting, especially as the weed made the going very slow. It was a sad journey too, as it marked very nearly the end of our trip, which I have to say has been surprisingly brilliant.

We stopped for one last night at the George pub at Ramsey Forty Foot, as Jim was suffering serious chip deficiency. We dealt with this by having dinner there, then waited until the morning to make the final leg back into Bill Fen, so that we could be shown Warrior's winter berth. Of which more later.
Posted by S at 12:38 PM