River Nene: Quite nice after all 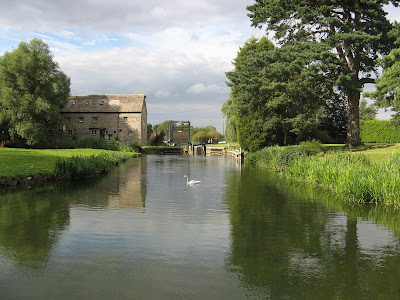 Put it down to that difficult fourth day, the trauma of leaving BW territory, and the possibility that the Northampton stretch of the Nene does not present its best face, and forgive yesterday's cynicism (well, not about the locks, obviously. Or the EA's love of instructions).

Today the river made a much prettier picture, time seemed to go faster, and even the locks were less daunting (though still irritating). In fact, at some of them the water was indeed coming over the top gates so fast that there was no need to open the paddles. We saw a few more boats today as well, and even shared a few locks. We didn't have to stop for anything, and racked up over nine and a half hours of travelling, taking in, I think, fourteen locks, including one with a rather exciting (but no less excruciatingly slow moving) radial gate. 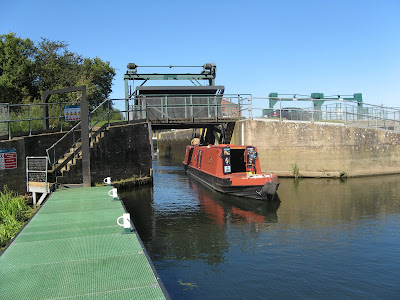 One thing I will mention in passing, is that the headroom indicators on the bridges seem rather unreliable and inconsistent. Two that read the same - one of them we sailed under with inches to spare; the other graunched the engine chimney. Fortunately, the new chimney that we ordered six months ago isn't expected to arive for another year and a half, and the old one has at some point in the past been cut in half and joined together with a cocoa tin, thus providing a sort of failsafe, meaning that we only lost the top bit of it.

On a very nice mooring tonight just off the main channel, with two or three other boats - and not in the middle of a town!
Posted by S at 8:34 PM