Tomorrow, this will be a festival 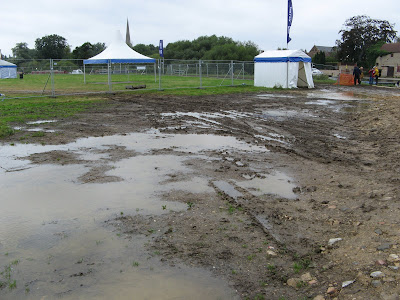 Today, it is chaos.

Talking to the chief festival organiser last night, it seems that this year the festival has been beset by more different problems than any previous one: flooding on the Nene, the derailment on the Ouse, heavy rain last week which has reduced the field to mud, making it impossible for exhibitors' vans to get onto site. Yesterday a crane fell over, just to add to the fun. But I'm sure that by tomorrow it will look as if it's all gone by clockwork; it's always the way.

Last night the organiser asked for volunteers to help unload vans so that they wouldn't have to come onto site. Jim went over this morning but came almost straight back, saying it was so badly organised there was nothing he could do. I might just have put that down to him being grumpy (surely not!) but three other people have come by saying exactly the same.

In an attempt to drain the site, the Environment Agency has lowered the level of the river quite significantly; apparently this will work because of the level of the water table and the nature of the land. A side effect of this is that we awoke this morning at rather a jaunty angle, one side sitting on the bottom.

Last night we went to the quiz. I do love a nice quiz. We were a bit hampered at first by the lack of a team, but then made one up with Mike and Marian on Brimble who are tied up next to us. Half the questions were waterways related, and the other half were meant to be general knowledge but were really film and TV, mostly... nonetheless, we came a creditable fifth out of sixteen teams, and when scores are adjusted for number of team members (which seemed to be unlimited) I think we can claim a definite moral victory.
Posted by S at 9:02 AM

Oh Sarah, it sounds as though this may not be a great festival after all. I hope you have your wellies LOL.
Lets hope the sun comes out and the mud dries up.
Have a fabulous weekend.